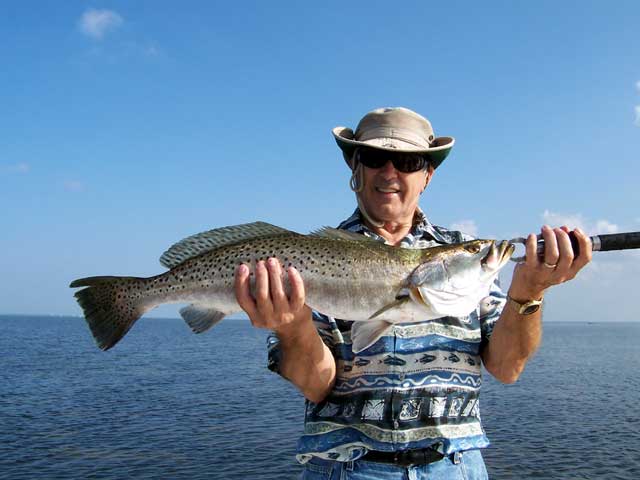 The waters of the Indian River, Banana River, and Mosquito Lagoon are home to some of the largest Speckled Trout found anywhere in the US. They are unquestionably the most popular game fish in the state. East Central Florida was once known as the “Speckled Trout capital of the world”. Conservation efforts over the last ten years are helping this once over-harvested species regain its former popularity. Giant specimens known as “gators” well in excess of 8 pounds are becoming more common every year and the numbers of three to eight-pound fish we are catching in the spring and fall months are telltale signs that this highly prized species is rebounding wonderfully.

Juvenile trout (10 to 14 inches) are excellent targets for young and inexperienced anglers on light tackle. These fish usually feed aggressively on small minnow or shrimp imitations throughout the day and simultaneous hookups are a common occurrence when a school of trout is encountered. This is an excellent species for beginning and intermediate fly anglers to target as well.

Six and eight-pound class spinning outfits are the most popular type of gear to use for trout. Fly fisherman usually prefer 5 to 7 weight gear. A variety of live and artificial offering will tempt speckled trout, but it’s hard to beat a topwater plug. Trout crash these with reckless abandon, often jumping completely out of the water to pursue these lures.

Small speckled trout can be targeted throughout the year. Anglers can easily catch double digit numbers when a good sized school is encountered. The best months for the larger “gator” sized trout are October through May. Especially between cold fronts during December, January, and February and also preceding the “new” and “full” moon phases in March, April, and May. 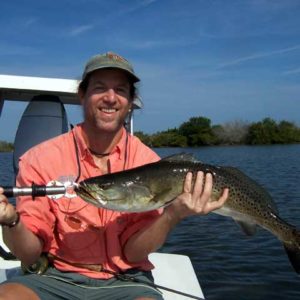 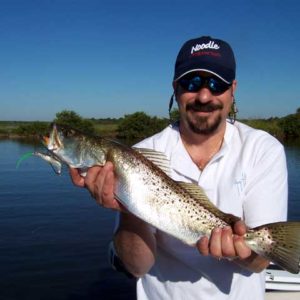 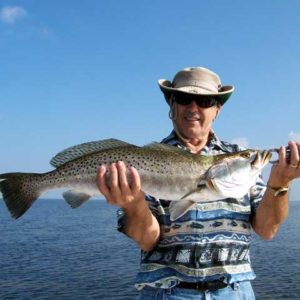